Victims who used their Excluded Workers Fund card at rigged ATMs have lost thousands of dollars of benefits. They're not getting it back, the agency says.

On December 3rd, Stephanie, a Chinese immigrant and resident of Nassau County, was skeptical about using the ATM at her 7/11 in Garden City. She had seen warnings in the news about credit card skimming that had taken place in New York City. She inspected the ATM with scrutiny, looking for any signs of tampering, and, once it seemed all clear, inserted her Excluded Workers Fund debit card and withdrew $400. It was the first time she had withdrawn money from the account, and it would also be her last.

Stephanie, 35, who decided to use an alias, is one of numerous Excluded Workers Fund recipients whose disputes of unauthorized transactions have been denied after they filed reports of credit card skimming. Documented spoke with three recipients who disputed their unauthorized transactions and were told that no error was found. For Stephanie’s case, Documented reviewed police records, transactions, and audio conversations and confirmed that $14,176 had been taken from her account. Two other individuals lost between $3,000 and $5,000 each but did not want to speak on record in fear that it would affect their appeal.

Donate now
We provide indispensable news and information for and about New York’s immigrant community. Your support will enable that work to continue.
DONATE NOW

How We Covered It: Excluded Workers Fund Hit With Debit Card Thefts

After the pandemic began, Stephanie lost her job as a waitress in Manhattan and she became undocumented when her student visa expired after she obtained her Masters in Business from The University at Albany. Unable to tap into unemployment benefits, she relied on the savings that she had planned to use for her immigration process.

She received her debit card on September 7th, 2021 with $14,820, and left it untouched until she used it for an online purchase of $105.14 two months later. She used it again in December when her savings were running low. Three days later she learned that someone had used her account to purchase luxury watches.

A bank teller told her to use the ATM at the 7/11. “I checked before I used the machine,” she said. “It all looked very normal to me. I didn’t know what I was supposed to look for.”

She withdrew $400 and deposited at the bank.

In December, the $2.1 billion Excluded Workers Fund was distributed across the state on debit cards by a company called Blackhawk. Almost immediately, New Yorkers began reporting that money was disappearing from their accounts and people were making fraudulent purchases online and at stores they never visited. In a story published last week, Documented detailed this wave of thefts. Shortly after, EWF recipients who have had their money stolen began reaching out.

Many EWF recipients are currently waiting to hear back from Blackhawk and the state as their bills continue to grow and rent debts increase, a situation the program was designed to prevent.

“It’s outrageous that so many recipients are being targeted by ATM skimming scams,” Public Advocate Jumaane D. Williams told Documented. “We pushed the state to establish the Excluded Workers Fund so that the people who need it most could access the benefits they deserve, not be defrauded. We must take every precaution possible to ensure these funds go where they’re needed, and we hope that the new guardrails put in place will protect workers from these scams and help workers to reclaim their stolen funds.” 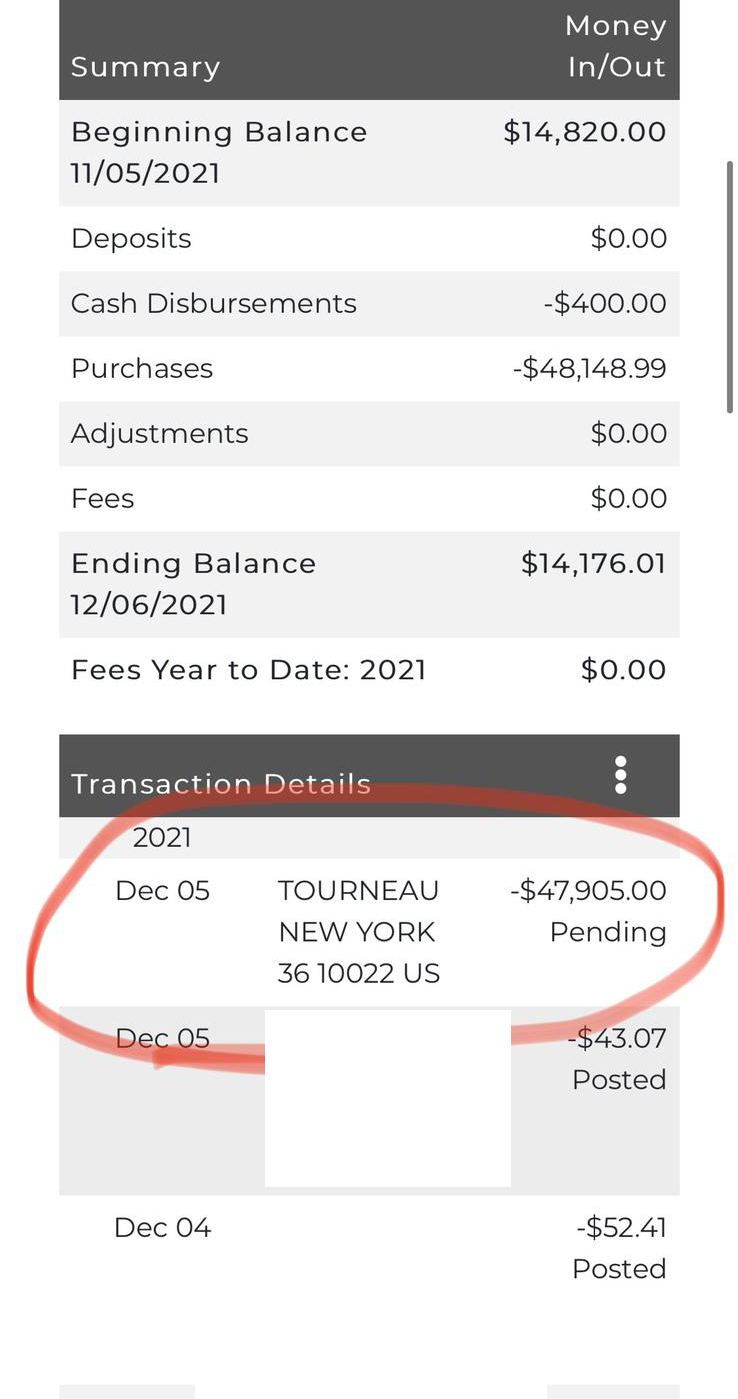 Two days after Stephanie used that ATM, her card was declined at a department store. Her account showed a pending transaction of $47,905. She called Blackhawk, told them what was happening, and the representative reassured that there was nothing to worry about because her EWF card did not have that amount of money.

The transaction had taken place at the Manhattan branch of Tourneau, a luxury watch retailer with locations nationwide. She called the store several times and a salesperson was unable to find a transaction under her name.

The next day, she went to her local police precinct. She approached the front desk to file a claim, and the officer replied with amusement “What is going on? Why is everyone coming in with the same cases?” Stephanie explained what the EWF was, and that she had fallen victim to credit card skimming.

The officer printed out a police report, which Stephanie had to email back to Blackhawk.

“There was nothing more that I could do. I just waited.”

Stephanie received an email from an NYPD detective who had obtained her information from Tourneau. The detective asked for the ATM address, and hours later told her that local officers at Garden City had found skimming devices on the ATM.

Given that the Tourneau and the NYPD detective had found evidence of fraud, she assumed her dispute would be approved. She was shocked when she received an email from Blackhawk stating “After review of the cardholder’s dispute claim we have found that no error has occurred. As such, your case is considered resolved and closed.”

She called the company and a Blackhawk supervisor told her that they had used the fact that her card number was swiped as evidence that no fraud was committed, even though Tourneau had confirmed that the transaction was not under her name, and part of a larger transaction.

The NYPD detective told her that Tourneau had flagged that transaction and had reported the watches as being stolen.

“So they did not get paid with that money. My account has a $14,176 transaction on it, but the total amount of the purchase was $47,900 so they are suspecting the suspect used multiple cards,” Stephanie said.

Stephanie contacted Blackhawk before the interview with Documented. In a recorded conversation between the Blackhawk representative and Stephanie, the representative states clearly that “since long ago the New York Department of Labor has been the one that approves the process of the cases.”

When she asked why her case got denied, the representative added that they do not have the documentation to say why her dispute was denied, and that they can only see the proof if the dispute has had a resolution. “We have not closed the case. But we are still expecting a final decision on your case. So we really appreciate your patience,” the Blackhawk representative said.

As of the date of publication she has been waiting to hear from a detective in her precinct and for a new decision to be made to her appeal.

Cash Relief for Undocumented New Yorkers Not Likely To Pass

NY's Excluded Workers Fund is Almost Out of Money

The Department of Labor and Blackhawk neither confirmed nor denied any ongoing investigations.

Rommel is a bilingual journalist and filmmaker based in NYC. He is the community correspondent for Documented. His work focuses on immigration, and issues affecting the Latinx communities in New York.
@cestrommel

UPS Workers Suffer in a Brooklyn Warehouse Without Air Conditioning

Fisayo Okare Aug 04, 2022
Early Arrival Newsletter
Receive a roundup of all immigration news, and the latest policy news, in New York, nationwide, and from Washington, in your inbox 3x per week.
HOUSING

Once a Boon to Chinese Restaurants During Lockdown, App FreshGoGo Has Become a Dilemma for Many

Can DACA Recipients be Drafted?